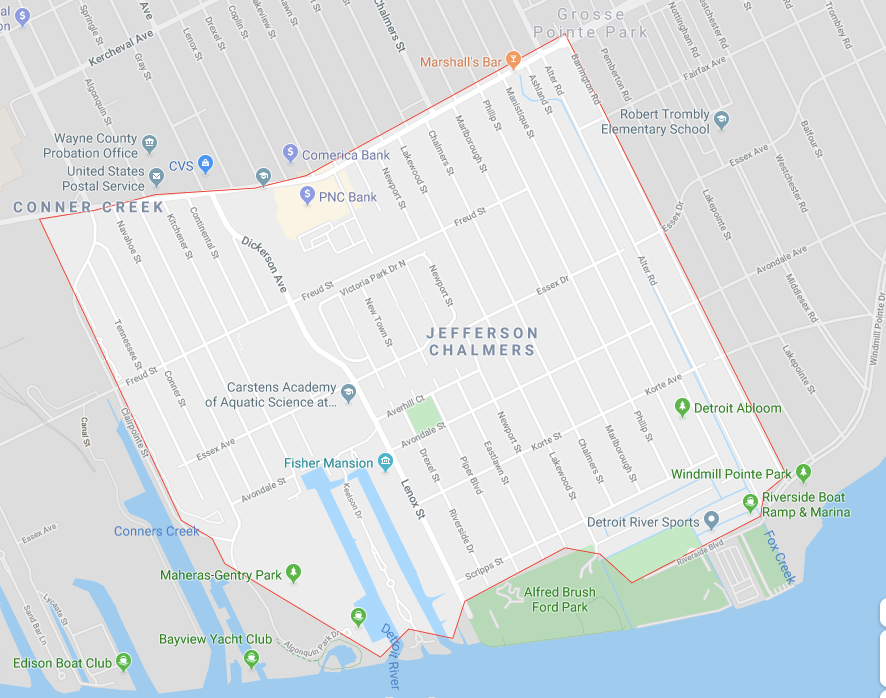 The Jefferson-Chalmers Historic Business District is definitely one of Detroits east-side luxuries. Spread over 29 acres of land, this District is the only continuously intact commercial district remaining along East Jefferson Avenue and was listed on the National Register of Historic Places in 2004. During the 1920s, Jefferson was the center of the east-side neighborhood's commercial, social, and cultural life. The district contains 57 buildings bordering East Jefferson Avenue, running for 8 blocks between Eastlawn Street and Alter Road, at the border between Detroit and Grosse Pointe Park. Most of the structures are two-story, multi-storefront commercial buildings, dating from the 1910s and 1920s but the district also includes many apartment buildings and churches, and houses two ballrooms: the Vanity and the Monticello- being unique in that two big-band era ballrooms, the cultural fulcrums of the early 20th century social scene, still exist within the district today. Vanity Ballroom (14201 East Jefferson): The Vanity Ballroom was designed in 1929 by Charles N. Agree as a flamboyant venue in which to socialize, dance and listen to music. The ballroom was a major venue for bands of the 1930s and 1940s, such as: Tommy and Jimmy Dorsey, Duke Ellington, Benny Goodman, Red Nichols, Russ Morgan, Art Mooney, Woody Herman, and Pee Wee Hunt. The Vanity deemed itself as "Detroit's most beautiful dance rendezvous". The ballroom was closed in 1958, but reopened in 1964 for one night a week. It was eventually completely shuttered, remaining closed and dilapidated. It was listed on the National Register of Historic Places in 1982.

The ballroom was built to accommodate 1,000 couples and has a 5,600 sq. ft maple dance floor, a stage or bandstand, and a promenade on three sides. The dance floor was built on springs which intentionally compressed under the weight of the people who danced on it, giving the dancers a bounce as they moved. The backdrop of the stage features a scene representing Chichén Itzá (a large pre-Columbian city built by the Maya people of the Terminal Classic period). The ballroom is a two-story building originally containing 5 retail shops on the first floor with the ballroom on the second. It was built with focused Aztec/Mayan Revival themes. The Monticello (14421-29 East Jefferson): This ballroom is a three-story structure that was designed by the firm Pollmar & Ropes. It was constructed in 1928. The building has Spanish Colonial Revival and Art Deco exterior design elements, with raised rounded parapets at each end of the building and a pent roof in between. The tiles in the roofline arch insert of this building are believed to be finished by the nearby Pewabic Pottery. The first floor contains storefronts whereas the second housed the ballroom. 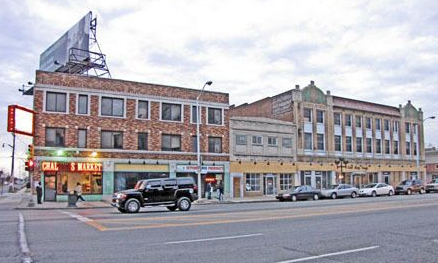 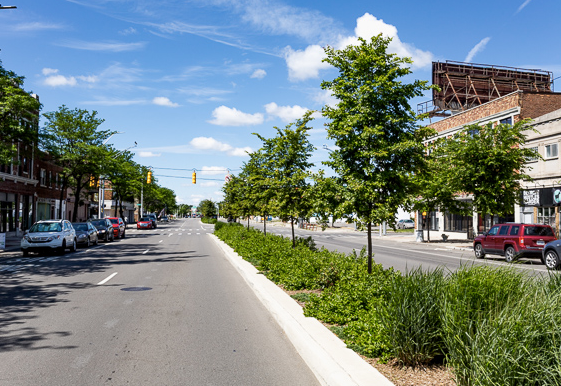 
1700s: E. Jefferson Avenue was originally an Indian trail running along the Detroit River until french settlers established ribbon farms, which the trail then transitioned into what is now River Road, connecting the farms with Fort Detroit.

1800s: The JeffersonChalmers area gradually became more agricultural once the swamp drained. In the mid 1800s, a plank road was built along Jefferson; from Detroit to Grosse Pointe with a toll bridge over Fox Creek. Roadhouses were built along the plank road including a saloon. A streetcar line was built through the district in 1891, connecting Detroit and Grosse Pointe. The land in the district also began to be subdivided in that same year and by 1893, a number of streets crossing Jefferson had been platted.

1900s: Only a handful of houses had been constructed during the early 1900s. In 1907, the area was annexed to Detroit. The rise of industry ushered in a rapid influx of residents, and the Jefferson-Chalmers Historic Business District began to grow rapidly as a result.
By 1913, a number of commercial buildings had been constructed, including the W.J. Hiller Building (14350-56 E. Jefferson), which is one of the oldest buildings still existing in the district. Businesses including tailors, hardware stores, drug stores, physician offices, grocery stores, and dry goods began to flourish. In 1915, the development in the area really began to explode; a string of commercial buildings, Automobile-related businesses and churches were constructed along Jefferson. New development continued in the surrounding neighborhoods well into the 1920s, which was spurred by the Chrysler Motor Company's construction of a huge nearby factory which also lead to a number of apartments being built to house the influx of workers.

The Great Depression ended the construction boom in the district, but business began to revive later in the 1930s with the establishment of new stores in the area. The district continued to thrive into the 1950s, but started a slow decline in economic fortunes in 1954, when the nearby Hudson Motors plant closed. The loss of jobs was exacerbated by the loss of residents, as more people left Detroit for the nearby suburbs. The decline lasted for the next 30 years. During the 1990s, there were major reinvestments in the area, creating new residential and retail construction growth. The district has recently seen a resurgence, with a Michigan Cool Cities grant of five million dollars worth of streetscape improvements and rehabilitation of several anchor buildings in the district, such as the Platte Warehouse at Jefferson and Ashland, and the Chalmers Building at Jefferson and Chalmers. 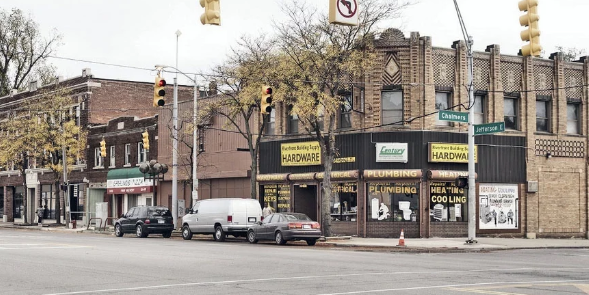 This district is extremely family and pet friendly. The atmosphere is peaceful and inviting. Residents love living here because it's diverse, safe and everyone is friendly to each other. There are ongoing community events such as Jazzing on Jefferson and even certain apartment complexes hold annual events to bring residents together. The parks are beautiful, the environment is safe and it's right near the waters which can be refreshing during the spring and summer seasons.
Fun facts: Current population; 8,453. The area offers residents a dense suburban feel. 44% of residents rent their homes while 56% own them. As of 10/21/19, homes on the market are being sold from $45K-$359K. There are a lot of coffee shops and parks in the area.